How to Remove Bats from Chimney? 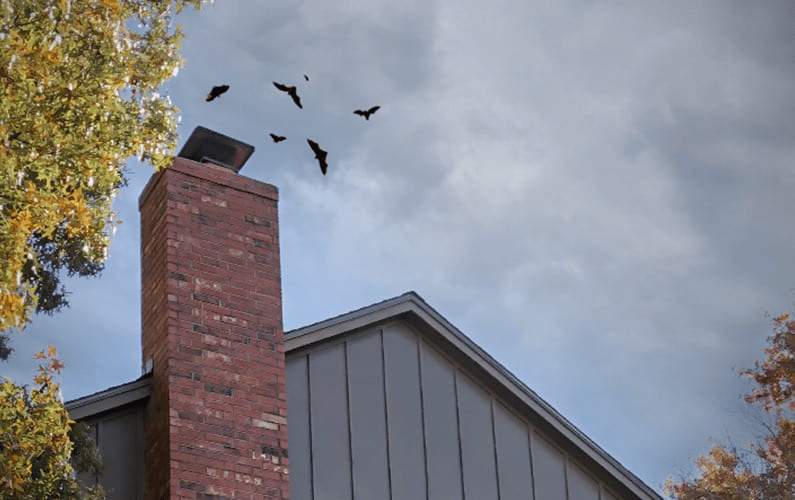 Bats can certainly be a nuisance, and at times a potential threat, in particular, if they are living comfortably inside or near your home. It is understandable why one would be concerned.

If you’re dealing with a bat infestation, it’s likely best to enlist the help of a certified professional right away. The exclusion process could be a bit simpler if they are confined to your chimney alone.

The same humane and cautious techniques can be employed to remove a bat house either from a chimney or a house. You need to locate the exit point and make sure to securely seal it off with a one-way door with consideration for the bat’s welfare and sensitivity to their needs.

If the infestation is limited to just your chimney, fortunately, you won’t have to confront them in other parts of the home or the attic. This makes the situation more manageable as the bats are concentrated in one spot.

It’s crucial to remember two key facts before diving into the specifics of how to get rid of bats!

To keep bats from making a mess inside your home, ensure bat exclusion by keeping the damper shut to make sure they stay out.

Do not Start a Fire

When you have a live bats infestation, many people ask the question, can I smoke bats out of my chimney?

To start a fire, you’ll need to open the damper, which could potentially let all the bats into your house.

If you start a fire, it often causes many bats to come fluttering out below instead of out the top. Furthermore, a lot of bats would be put at risk, so it’s against the law and it’s not humane to kill bats.

Plus, bats can sneak into tiny spaces, and if you light a fire, to your surprise, you may observe a bat colony moving in your attic and walls.

Plan to remove the bats for good

When it comes to getting rid of bats from chimneys, the same principles can be used as if you’re clearing them from a home, or any other kind of structure. You need to identify the exit point and make sure you put in a one-way exclusion device over it.

Unfortunately, you can’t just let the bats in the chimney out at night and then put a chimney cap on. They don’t all fly out together. You should properly install exclusion systems that let the bats fly out but don’t allow them to come back.

Finding the exit point in this tricky situation might seem as simple as the “big hole at the top of the chimney” – but is it that effortless?

Many of the cases of bats descending the chimney stack are due to bats finding their way in through wider passages where the top of the chimney and the roof meet, or because there are exposed distractions.

Bats aren’t always so fond of flying through big, vertical holes. They prefer small, sideways spaces. It’s a good idea to check all around your home for bat activity and see which areas they’re roosting.

A night watch helps a great deal. Even if you know you’ve got bats crawling about and making noises in the chimney flu, you might observe the bats flying out of areas you didn’t expect.

Be sure to leave some open space at the top of your exclusion netting if birds are trying to escape from the top of the chimney flu – this way they’ll have an outlet to fly up and out at the base of the netting.

It can be a bit tricky to manage efficiently. If you’ve got a bat colony in your chimney, I suggest that you take the time to hire a professional bat removal business.

Now that you are aware of the plan for the removal of chimney bats, another thing worth mentioning – if there happens to be a group of bats living in the chimney or chimneys, it’s usually a group of female bats that are looking after their baby bats!

These furry little creatures give birth to their babies in May, so you won’t be able to see them take to the air until mid-August (the timing can vary depending on the species and region).

So if you got a bat in your chimney and you’re thinking ‘ let’s get rid of them’, please take a PAUSE and remember to never remove them in the late summer months, i.e. ‘maternity season’. Make sure to remove them before it or wait until the baby bats are mature enough to fly on their own which is around August.

If you remove these little critters out of your house in summer, the baby bats will be stuck inside with nowhere to go. Without their mother, they scamper around and make it into the house.

What to Do When You Have Bats in the Chimney

It’s understandable to feel overwhelmed when unexpected visitors come in the form of wild animals, particularly if they have wings or you have an irrational fear of them. However, it is important to try to stay calm and logical to solve the issue.

So, first and foremost, don’t freak out – panicking won’t help anybody. It could make the situation more difficult for you and the animal, so try to stay calm and collected so you can get the job done.

How To Get Rid Of Bats

Unlike other wildlife animals, all a bat requires is a tiny hole no bigger than 3/8 of an inch to gain access. Areas most commonly targeted include:

Use of Exclusion Devices

When it comes to removing bats humanely and safely, there are not many options. The best option to remove bats in the chimney is to install exclusion devices and seal the area to stop the bats from entering.

Another option is to use a special netting material designed for catching flying animals like bats, birds, and even squirrels! This netting material has been tested and proven as effective at catching these animals without harming them or causing them any pain or injury when they are caught by it.

Be sure to apply the repellant early in the evening. The bats will be more likely to migrate away from the area around dusk when they’re most active. Keep your ears open for the chirping of bats and take a look at your chimney at dusk.

Don’t solely depend on repellents – they can be used in combination with other efforts, but they rarely have any real effect in terms of sounds and lights.

Don’t go down the route of poisons or fumigants – there are no approved products that are available specifically for bats and additionally, killing bats is prohibited in the majority of states.

Avoid using traps – they don’t tend to get rid of all of the bats in your chimney. If you don’t stop them, the remaining bats will reproduce and the problem will go on.

No matter how you go about trying to get rid of bats from an area, the most effective way to prevent them from getting back in is to make sure that all points of entry are sealed up properly. Several materials can help with this, such as expanding foam, wire wool, hardware cloth, and more.

If you don’t take away the dead bats, their remains can be an invitation to other bats and a host of unwanted critters, including flies, maggots, mice, and rats. This can lead to an unpleasant atmosphere in your house, making it unbearable for you to stay.

Bats leave bat guano which can sometimes be hazardous to the well-being of the people inhabiting the building.

Bat droppings can transmit Histoplasmosis, which is a dangerous illness. Thus, thorough cleaning and maintenance of your chimney or home after removal becomes a must.

If you have a bat problem in your chimney, it is important to call a professional wildlife removal company. There are different approaches to getting rid of the bats in your chimney.

The best way is to install a one-way door on the top of the chimney. The one-way door will allow bats to leave but not reenter. Moreover, you can seal off all entry points into the chimney and use an airtight sealant around any cracks or gaps in the roof, so that no more bats can get into your home.